skip to main | skip to sidebar

I need to change and add a few things to the engine, and it is far easier to do most of this stuff before the engine goes in the chassis. First up is adding a water temperature sender. The factory sender is in the left-hand cylinder head, and will plug into the GM wiring harness and ECU. This factory sender is GM specific and cannot be used to feed an aftermarket gauge, but is critical to ECU operation so that the ECU knows the engine water temp. But the gauge I am using of course needs its own sender. The left and right cylinder head castings on Chev LS engines are the same alloy casting, so the location for the factory sender is also in the right-hand cylinder head and is blocked with a threaded bung from the factory. This is the best place to house the aftermarket water temp sender.

The gauges I am using are from VEI Systems and they came with the water temp sender. Like most aftermarket senders the thread is 1/8 NPT. The thread in the cylinder head is M12x1.5, so we need an adapter. Autometer make such an adapter, part number AU2277, but the internal diameter of it is just slightly to small to fit the sender, so I drilled it out by about 1.5mm

Then the body would fit inside the I.D.

And sadly this is where it all went wrong. Drilling out the I..D by 1.5mm weakened things enough that the housing of the thread adapter cracked upon tightening in the head - I didn't do it that tight I promise! I felt it give when tightening, and thankfully stopped quick enough that I was able to back it out with snapping it off in the hole, and without damaging the head. The crack can be seen in this picture just below the end of the thread.

Time for Plan B. I bought another thread adapter, and Autometer also make a "shorty" temp sender which fits natively in the adapter (part number 2259). I am not using Autometer gauges, thus I could not be sure that the resistance from the VEI sender and the Autometer sender would be the same, so I had to test it. So I cracked out the water temp gauge, a 12v battery, and for each sender I ran it under the hot water kitchen tap for a few mins and monitored the temp reported on the gauge - this confirmed that both senders are sending the same resistance to the gauge. In this pic it is measuring the VEI sender and the Autometer sender can be seen on the bench. Both senders reported the same temperature on the gauge
﻿ 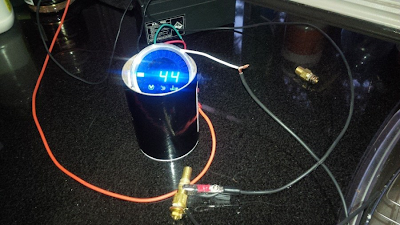 So the shorty sender went in the thread adapter with a bit of thread sealer and it's all buttoned up ready for attaching the sender wire.